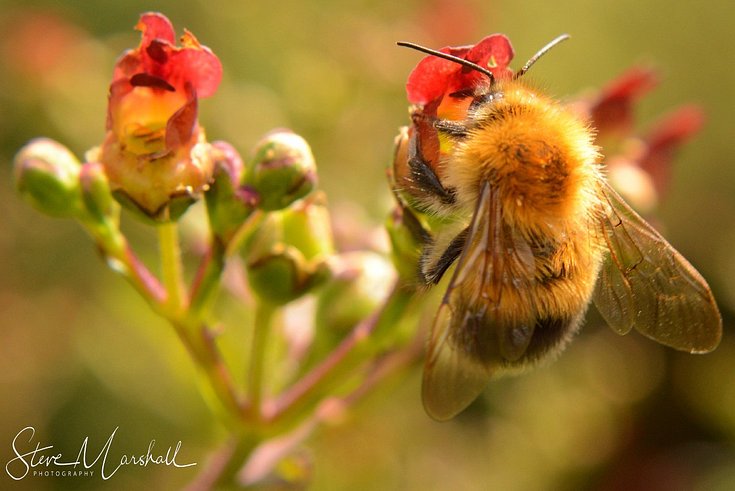 It hangs around the path and off the trees; small but beautiful star-shaped purple flowers with protruding yellowed centres; disported less in supplication than as an offering or invitation; a shaded purple deep as night than holds a deadly heart.

The elder is a ragged thing more shrub than tree it has no size or strength or standing; with no clear shape it wanders vaguely in its space; beside the lords and masters of the wood it is but some lowly courtier wending its way largely ignored and overlooked; and yet it has a flower white and wonderful that does please and charm the eye and if steeped sufficiently in gin also the tongue.

Summer rain falls lightly soaking nothing but adding a sheen to every leaf and drips to some; sunlight catches drops setting the world asparkle for an hour or so; then clouds roll in threatening real rain eventually parting allowing sun to glisten wherever droplets puddled.

Birds bang against the window panes; mainly youngsters trying out their wings and discovering how huge the world can be; but not as huge as eyes believe when they reach our clear transparent glass.  Most stumble drop recover and fly off but one lies twitching briefly before it succumbs and life departs.

Not stair rods but heavy rain depressingly relentless rains down; earth swallows it into the dryness; ducks come out to enjoy it; chickens wander briefly before heading back to shelter; young dog refusing to come and walk; whilst following me around on the morning round until we both are wet is old dog either pledging his loyalty or hoping for a treat and breakfast.

In silence mist steams from dew-points and slips softly and silently away hopeful that witnesses to this dawn journey will be still asleep and unaware; an haphazard haze dissipates like someone who unexpectedly lost track of their virginity last night and pretending not to be here now heads home his dress slightly stained a scarf trailing in the non-existent breeze.

Oh soggy world that has such water in’t!  Summer relaxed last night having settled warmth upon the world whilst storm stretched her arms girded up her loins and spat; spat great gobs of water down upon the world; called up wind and used that old alliance to hurl water sideways; and in the morning during her bouts of breathing when rain refilled its tanks wind it was that shook the trees to drench the travellers below.

Old dog trips on branches broken by the storm and left to litter their way across the path; from long runs of ash that stretched toward the heavens to leaf clusters of poplar that aspired to a wider world; whilst oak and beech are rare amongst these fallen elder flowers that were caught by wind abound and even bunches of mistletoe hoping for an early Christmas appear amongst the detritus; and bowed but not broken bending with the weight of water are the sturdy limbs of sloe slow growing the season’s fruit.

Is that my heart amongst the dappled light under oaks and walnut where the wind plays with its shape; or is it in the gentle rumble of the new filled stream slowly wearing rocks and carving banks; or does it flitter with the iridescent blue fly that is never still; is it growing beside the lush green of nettles and brambles branching upward from the damp earth; or is it beating in the very soil cooled by rain warmed by sun and linked to each and every thing?

These are the fallen; whether on the beaches of Normandy or in the thousand years of war against which we hold a fragile peace.  And these are the fallen; the branches broken from a tree and storm driven to the ground that the tree might survive another season yet unbroken; some old and long lived most young and innocent and vulnerable and not really understanding why.

Translucent liquid coats the leaves as sun tips over treetops and illuminates the sheen of water that sits on them; drips steadily replaced by fine rain the coating ever-changing remains the same.

Cobwebs in the grass small spitballs through surrealist contortions to complex semi-webs as if adolescent spiders were competing for some prize in weird and wondrous webbery; all far from the iconic images we expect our arachnids to deliver neatly spiralling between the outstretched twigs of ash or beech or cherry.

Sunlit in the morning there is a curve of river with trees lined on both the banks; seeded decades back they look positioned equidistant from each other; and as the river runs it is carving out the outer bank and earthing up the inner; one tree on that outer curve has fallen as the bank has disappeared and her companions are standing still awaiting their own turn.

Old dog stumbles on a piece of branch broken in a recent storm and not pushed from off the path.  I watch and feel for him in his near blindness and sense his failure to comprehend.  He walks on the path sufficiently familiar that what hints now reach his eyes are usually enough to guide him.

Nettle bramble and sloe these are our greatest crops and the greatest of these is sloe; not just in its size, nor in its thorns long and vicious but in its fruit.  Nettles bring butterflies to feast where brambles merely ramble; but sloes grow slow throughout the spring and summer requiring frost or freezing to release their juices.

Unleashed matters; unleashed allows what evolution has left of long past lupine ancestors to show; young dog runs and sniffs stands and stares and chases and pursues almost any moving thing be it bird or snake or deer sometimes to catch and kill; whilst old dog declines the hunt and focuses on sniffing and wandering in search of me his fading eyes and declining hearing oft times requiring help.

Amongst the birds there is a sense of pause before the solstice; else sunrise was sufficiently earlier than we three that the dawn chorus has been and gone and gone and what remnants we now hear are but the order of the business of the day and not that early tumbling cacophonic overture where maybes are sung of without fear and when dreams are told and the wondrous imaginings of night given vocal flight.

Upon a gentle curve of river hangs a tree clinging to a bank being eaten away behind it; tree is falling and has been falling since it seeded here; its trunk and limbs bent like giant longbows as they have struggled over years against gravity for light; and now its outer branches dipped below the surface of slow and shallow river it must face a coming winter when the water will bring debris down to rest against it and bear its flood weight upon the happenstance dam and most likely damn the tree.

Five fledgling flyers gathered on our windowsill; most probably from out the nest built within the vine; and parents fly in to feed them setting wings ablaze in anticipation; whilst we close in behind them to watch and marvel at the wonder of these lives.

Komorebi - sunlight that filters through the leaves of trees is always wondrous; it alters every time a tree grows or falls; with the annual growth of trees; and in the movement of the seasons; even on a familiar path it changes with every step and with every minute and with each time we walk the path.

The path less travelled unwalked for a year or more grows saplings; oak and ash and beech and hawthorn; bramble yet to crawl to these more open spaces; saplings uncrushed by foot or paw before their first leaves could fully unfurl; unbroken by the careless traveller intent upon their way; not lost to dryness nor to inundation some may survive the winters yet to come.

Deeper darker denser are the greens; disappearing are the single coloured thin gay greens of spring; and fuller fatter more wholesome greens take space; complexity develops in the mix of colours in each leaf; veins sometimes paler sometimes darker than the spray that itself varies from base to tip and from side to side.

Beneath the birdsong trilling and shrilling warbling and demi-quavering; behind the joy and sudden bursts of life there is an almost silence a rhythm so soft and slow that it can only be heard by an inner ear that listens on another plane; I wonder if this is the sound of breathing trees standing with us in symbiosis.

Strands of bramble struggling to touch and feel to grasp and live stretch across the path like prayer flags gently waving to one other in the barely moving breeze; like hands of refugees scrambling and hoping and begging that we take their babies and stow them safe upon the barque we built over centuries; built strong and true upon the backs of their fathers and their mothers.

Action is at the margins in the space which is neither wood nor field and more than hedgerow; here the birds sing in celebration of the day; and in the centre of the wood there is a silence made real by the ring of sound that filters in from all directions; and here to there is a stillness and a peace.

Mist rises in the early light; the merest touch of dew left by the short warm night is being lifted off; its soft ethereal movement belies the speed with which it is being removed; sun rises up flexing muscles and promising another hot day.

A step back from the path stands an oak not old but no longer just a sprightly sapling; as tall as a man with his hand held high it has reached the lowest branches of the poplar grove within which it seeded.  Now it must wait and hope that one of these will be undermined by water and slowly fall away or become storm cracked and tear a hole up to the sky through which the oak may spring.

Something large stirs in the undergrowth; too large even for young dog to give chase but he stands his ground and squares his shoulders assuring me I should not be afraid.  No high perched head nor darting step so not a deer; perhaps a boar beneath the green wallowing in some shade; and now disturbed must rise and wander on.