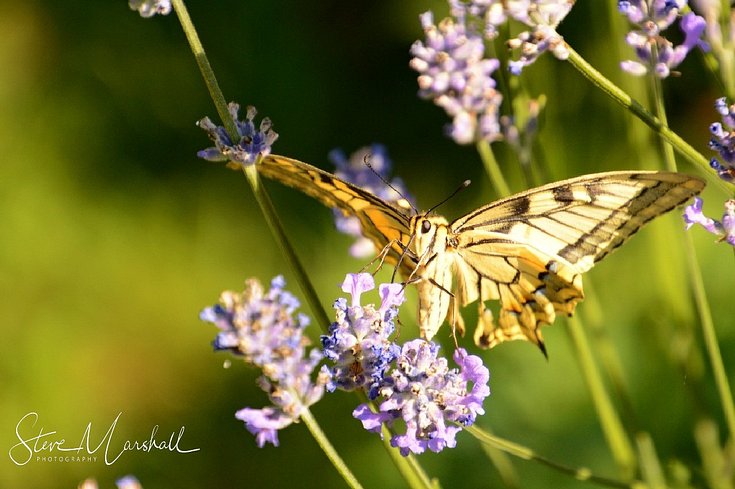 The merest thinnest pretence of moisture pervades the air; claiming existence only on quantum terms; pretending to be present but mainly evaporating before it can land; and it is gone and is no more than the memory of something already lost and forgotten.

Gangle-legged all limbs and wings and beak and things the crane arises from the shrubbery and scrambles for the air and there and fails to fly but flaps for freedom as we watch in wonder then feathers fully unfurl and gracefully the skies are greeted.  Later I meet a crane the same or different upon the road; hidden in the ancient silvered tarmac cross hatched with deep black reparation it rises invisible from out the ground before my thundering vehicle but just sufficient distance for me to feel little fear of hurting her and for her to rise majestically and turn her head disdainfully to me.

Air is full of summer promise; of hopeful sun to warm the face and gentle breeze to cool the joints; and then a burst of butterflies a convocation and a congregation erupts from worshipping at a stand of nettle; all browns and creams and reds and greens and burnished bronze and electric blue.

Dragonflies wander through the air floating as much as flying; bodies so thin they are almost entirely ephemeral as if they were not really of this world but an infinitesimal intrusion from another universe impinging upon this for a brief and barely noticed moment.

Side by side they stand siblings since they seeded here two or three decades ago; two oaks close stalked; trunks now the width of a goodly calf the bark rough and callused as a workman’s hands; canopies almost intertwined spread out in great half circles; and do their roots entangle and speak of secret things.

Waters run shallow and that means soft and almost silent; what was a waterfall has become a trickle between rocks and amongst the twigs and branches gathered there; angled banks are exposed to direct sunshine for the first time in a decade or more; almost stagnant surfaces gather motes of dust and the fallen feathers of passing birds as if solidifying whilst a little liquid slips away below.

Exhumed from out the earth far from the nearest walnut lies a half shell; possibly the fairy-tale ship of a team of insects exploring the river or the hidden hoard of some long-departed squirrel that carried the freshly fallen fruit to its too secret hiding place.  Ridges and valleys of the outside now softened by the soil that coats the shell in dust damp from the deep earth it will dry in the sun and turn brittle through the summer.

Dry crackling underfoot; yesterday they bent and today twigs snap when brushed; tips have lost water and become rigid as an old man’s fingers; leaves hang soft sad and sullen; sloes droop wilted struggling to plump their fruit; even bramble tendrils stretched across the path exude limpness and a desire not to do.

Web gathers naught but dust now the spider’s gone; hangs there stretched between its wooden frames a testament to hours of work and hope and struggle; not intended as a work of art but remarkable that a creature can create something a hundred times bigger than themselves with such symmetry and precision.

Who speaks this morning?  Insects more than birds in the medium of sound; but what conversations are happening beneath the earth amongst the roots and hyphae?  This oak ancient by two centuries splays its crown and spreads its roots.  Yards away its sibling struggles within its first few years.  And do they talk?  If not talk communicate?  Electrically?  Chemically?   Connected by fungi if not by touch of what across the decades do they speak?

Clouds conspire to cover up the sky and prevent the sun from beaming down and so a coolness greets the day; insects hushed and still do not flitter through the air but wait and wonder; birds still sing but quietly almost in the whispers of the neighbours telling stories of other neighbours in voices hushed to show themselves as somehow something more superior.

Birds hear birds fish see one another insects crawl across each other but what is the language of trees; how does this oak greet that ash that catches the sun ten yards earlier each morning; what is their syntax and grammar; with squirrels red and grey how do they manage the subjunctive claws; do the mycorrhizal fungi that connect them speak the same tongue or are their interpreters at each root tip; how do they punctuate; and do they argue over the oaken comma?

Dogs and poplars live life as permanent adolescents; her roots are shallow barely entering the earth and suck up moisture nutrients and all around them oblivious to any impact; she is light and thin and lacks the strength and depth and years of oak and beech;  fast growing she hurtles for the sky until wind or storm snaps her like a twig and hurls her hopes to heaven and her body to the earth.

How speaks the butterfly flying from buttercup to buttercup looking as it must at a life that will end before the autumn’s out an hundred days if lucky; does it share some language we have never heard with that young oak that might be aging here nine hundred years from now; and what of time; does the butterfly appreciate how much faster life is for it and how much slower for the oak?

Midnight hare is on the prowl; down the road from hedgepig’s tarmac wanderings; he stands and stares unfazed by my lights reflected in his eyes two burning spots within the moonlit world; he stares me down as I slow my pace and waits until I am almost at a halt; then having asserted his authority he almost smiles and calmly hops into the hedgerow.

Earth turns to dust in the dry season and dust takes the imprint of boot and paw and holds them in a temporary grip that is as strong and certain and unyielding as a wind that dances with sand and climbs slopes to find poetry buried in grass before dipping its toes into water that flows as slowly as church mice when the cat is about and slips quietly between brambles to speak of the meaning of time with the trees.

There is a thirst that turns all greens the same; gone are the acid mixes and dark green counterpoint; now all have merged into a green overlaid with a patina of a brown so pale it is almost grey that is the earth blown to dust.

Heat is there above the thin cloud cover; waiting for a gap to sear down and brand the earth; all whiles seeping in between the layers to slowly almost gently heat the air and water plants and animals.

Rain made a passing visit last night and left her calling card a thin ephemeral thing not worth the name of cardboard; so little fell that whilst grass and field have a hint of dampness the woodland floor is all but dry droplets failing to reach it except to leave vague outlines of the leaves edging open spaces.

Hint of dew amongst the longer grass where end of night has not yet warmed it out; where insects gather to sip water converse and spread untimely gossip; and despite the night time water still the grass still is limp and tired and faint.

Even birds have lapsed to semi-silence in the coming heat; songs there are and arias and chatter and warblings of wonder from the youngest as the world unwraps itself before them; and these are quieter using less energy and less air to save the breath for breathing.

Unchanged for weeks they hang in bunches; shortly after the flowers faded and gave way in spring suddenly they were just there as if arriving fully formed; and a moment will appear in early autumn when they change from hard green beasts to ripe purple elderberries.

Day is early but already there is a difference between the heat of open pasture and the cool of shaded wood; old dog looks at me with his near blind eyes as if to say we could just home and have breakfast; and even young dog moves with little enthusiasm little sniffing and no running.

Heat waits upon the horizon slipping between the trees when no one watches slides across the grass and nestles amongst the leaves of dandelions that hope for sufficient breeze to blow their spores away and cool their heads.

Elder berries turning purple where they hang in long sunshine; in the woodland shade they still hold their green in a reluctant adolescence.

Priapic brambles line the path the only plants not bowed by sudden rain as sky was torn apart by thunder and by lightning; and rain pushed out the heat and cooled the world.

Wet glorious wet; earth drinks of all that lands or crosses it; feeds back that precious liquid to thirsty plants who flex and reshape stems and tendrils to fill all space and open leaves once dried to parchment; now fuelled from below can take the sun and turn its power to food to grow the roots that find the water.

Too late too late sighs a spray of leaves their siblings full fleshed around them sucking at the moisture flood that roots are feeding them from the storms of water fallen to the earth; but no sap runs in this branch where cells desiccated and withered can no longer transport the stuff of life; and whilst new life bursts and blossoms on the boughs about they sag and sigh and wait for death.

Gentlest of breezes lifts single tethered spider threads to dance in dappled light emerging as if from nowhere and then disappearing back again amidst the wondrous magic of the sun; long gone to ground or nest the beasts that set them and failed to tie down the other ends.

Dew has formed at the base of grass between the tightly clustered stems; some collects on paws and boots but most will seep down to reach the roots provided it hurries to avoid the rising sun; a sun lightly shrouded in cloud allowing the dew a little longer to reach its goal.

Earth drying as the storm has long passed the water fallen the river taken its share and passed it on; plants take some to fuel their juices to transport food from root to tip and tip to root; breeze and wind extract a little more removing liquid and creating gas and play with it until it floats away.