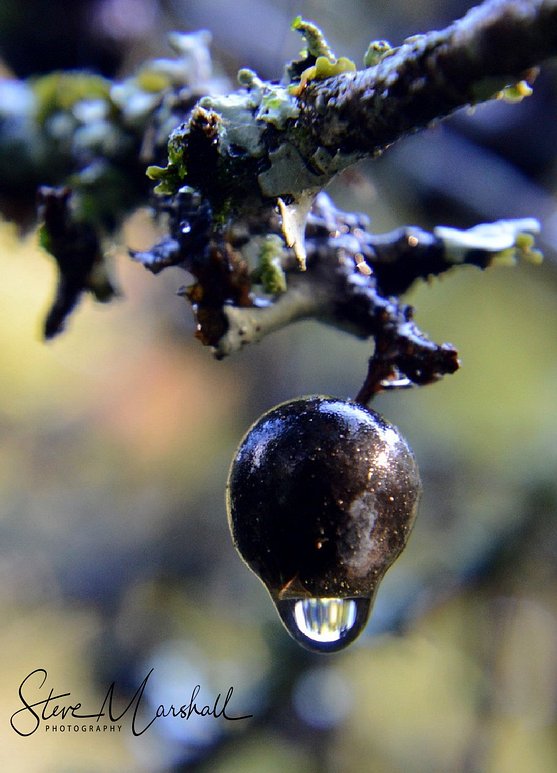 Cold has settled in and spent the night stripping colour from out the leaves; golds fade to pallid bronzes and insipid coppers loosing precious depth; pale browns lying low shrivel out their lightnesses and darken into earth; and greens divide between those that hoard their green sometimes protecting it with spikes of sharpness and those that decline like loved ones diminishing in successive sunsets until their softly yellowed skin is almost white.

Frost arrived and dropped upon the earth taking anything from out the air to leave clear views across the grass which stands crisp and firm sparkling in the sunshine; water hard in coldness but not full solid save some edges of standing ponds which have a mushy feel.

Last night freeze joined frost and cold to chin wag about the bitter silent weather; standing water solidified and stood; birds pulled their feathers in to hold the little warmth their bodies could produce; rats burrowed deep to find some place that would not chill the blood; and moving waters crept along as silently as any could.

Copper is the colour that holds the space and catches light contains it and releases it unfurled into the soft mist that hangs light yet dense across the trees; trees with just left leaves that hang upon them the desperate progeny that will never blossom, the shrouds on skeletons of the year; an occasional splash of yellow beautiful within itself slashes through the air like a bleeding wound and cries into the earth.

Soft silence greets the day; sense of nothing moving of all waiting for another to start the ripple that will become a flood; and then the dew drops hanging on the ends of twigs denuded of their leaves and stretching out within the cold begin to move; less a wind than a shake of the wooden sinews of the wood creates a few moments of their gentle timpani.

Rain as gentle as on the lightest Cumbrian morning; drops so small they barely fall but fall they do and do not hang like mist; falling slowly as to them the air is heavy stiff and viscous; and on blades and twigs they gather in their companies to form larger droplets to catch the light and curl and hang like diamonds.

Wind cuts through dawn’s gloaming ruffling fur and cooling noses stirs the grass lying damply dormant puddled with leaves that have lost their glamour and now are darkening to earthy tones never quite drying in the cold air even when touched by low sun.

Black blends through bleak steely grey to a blue as dark as dreams then using the under edges of clouds to reflect and refract fine threads of red and pink and crimson appear meandering gently like the shallowest of uncertain cuts in flesh were the sky experimenting with self-harming as it brings its light upon the wounded world beneath.

There is a perfection that only exists in an English suburban lawn; a precise rectangle in the golden ratio surrounded on its four sides by paving stones by slabs by concrete and by tarmac; meeting all the requirements of a kind of Englishness.

Swathe of mud and water left by pigs housed for too long on one patch of earth; the long straight lines of electric fence demarcated now by the juxtaposition of fresh growing grass with muck and mire.

When future has been torn asunder there is joy and solace in sharing space with a toddler and her baby sisters; innocent and unknowing of what their elders have wrought; full of the joys of living life as life should be lived; much smiling some crying and using of the elderly as climbing frames.

One bright green parakeet settles upon the bird feeder; unaware of the illegality of its immigration it pecks at seed perhaps intended for native birds; except of course for pigeons those least loved of birds.

Two solitary crows black as night stride across the lawn; a pair together holding space like dancers they play many parts strutting and hopping their way across the stage but solitary in their movements and intents; aware of but not with the other they are both paired and yet alone.

There is a special kind of silence when the babies and children are not there.  In their presence even when they are quiet there is an underlying vibration which is their song within the worlds that sings their presence on the planet.  When they have left that pulse survives and trembles through the ether to hold connections from each to each and all to all.

Mist dense and heavy hangs across the dawn through which we homeward drive; trees of England’s garden bunch in clusters branches seemingly intertwined whilst silently conversing of the burdens that the world imposes and in an hour those of France stand in lines separate and yet together in their serried ranks saluting those who pass.

Last leaves left on trees are drab and dun their colours leached away into the earth washed down into the river swirled away around the bends and lost in confluences unseen and far away; identities stripped down unto the marrow they stand naked and exposed the children of the woodland waiting warily for the chill of winter.

Grouped by waters washing over land the dead leaves congress in conclaves pressed against the roots of trees; wind lifts the highest from their councils and carries them to other caucuses to conduct new conversations in a world transitioning from life to death then to humus and to soil and last and first to life once more.

Wet wet water lies upon the earth and swims from out the river gently overwhelming banks the running river water comingling with the standing rain water and waiting for the soaked and saturated earth to leave some room for them to sink and settle.

Daylight struggles to creep out from behind the clouds of night shadows holding to the earth tied down by trees; but clouds are finally pulled asunder and grey dawn briefly heralds the brightness and the brilliance of a clear clean day; and all too soon the wind picks up and calls down another darkness.

Swinging gently in dawn’s remaining wind a truss of leaves left from a clematis hangs on a single wire moving in and out of sunshine; the whole has the stiffness of age and immobility; individually the leaves like the long beards of aging men wave in the gusts.

Light spills through naked branches to sparkle across the grass now spotted by dew and by hoof puddles; water will subside but the horse marks will linger as the earth dries their mud walls waiting for the unwary to slip and stumble and how many years of growth and death must pass to fade and soften and to obliterate their signs.

Sparkling blanket roams across the land a vast flat monster rippling delicately and dangerously through the trees catching droplets of sunshine in each wave beads broken from bars of light that shatter against the naked branches then carrying them relentlessly onward.

Mist clings to earth it has released from inundation; between the blades of grass liquid thins and vapour slowly rises each tendril holding tight to cobweb shreds that spiders whilst passing on adventures built when pausing for conversations on the meaning of the web; haze and fog and cloud commingle in the air and nod knowingly of longer days to come when they will be banished to minor roles upon the edges of the stage.

Discrimination happens even between leaves that lie in death upon the earth; some in the low sun of solstice gone still holding the last drops of receding river are sparkling successes in the beauty that nature offers; whilst others silent sad and sorrowful show no shimmer beneath the fine silt layer that blocks them from the light; unseen amongst the shining as if the world we see of nature did not want them.

Waters speak again as they run between levels over rocks and river debris; no more the silent swirl of water that stretches well beyond the banks silencing all interesting twists and turns and falls and drops; now we hear you telling us the story of the upper reaches and taking ours and carrying it to distant lands.

Soup turns to mud and mud turns to soft soil and soft soil turns to earth and some even stops moving when we tread upon it; hard dry earth suitable for cricket and the like is many moons away but some waters at least are receding tentatively downward.

Cold clear sharp sea air comes breezing over ramparts down the inner slope and ruffles feathers of a robin watching the strange entanglement of man and dog and second dog two leads criss-crossed almost as unkemptly as the coat the man is struggling to close against the wind despite the doggish joy encircling him.

Elves and elfens (perhaps released from Santa’s zero hours contracts) came dancing through last night and left the land sprinkled with fairy dust that glittered and glistened in the cold of dawn covering all the grass and leaves.

On deep cold darks like yesternight there is a place along the path that has a magic all its own; where other spots have frost crisp leaves hardened earth and may see the sun today here there is little but a cathedral of silver climbing up the spires of trees and every bramble leaf is coated white to hang in shade like phantoms and old oak leaves lying chilled and low have all the inflexibility of their mother trees.

River runs overfull leaving puddles which climb into the air as mist and hide the birds; the rising sails of windmills disappear into the haze that must eventually be cloud; and as the land rises ahead of us the vapour descends and thinness thickens; dropping away as a hill is crested so thickness thins again to a fine ephemeral cloud of droplets that is not thick enough to call a cloud.

Cold clocked in last night cast out cool and chased off chill; settled in the waters still and moving so the river sounds have hardened and puddles have considered freezing; taken over air so bees will not fly till spring and leaves have crisped both on the ground and where they hang still on their trees.