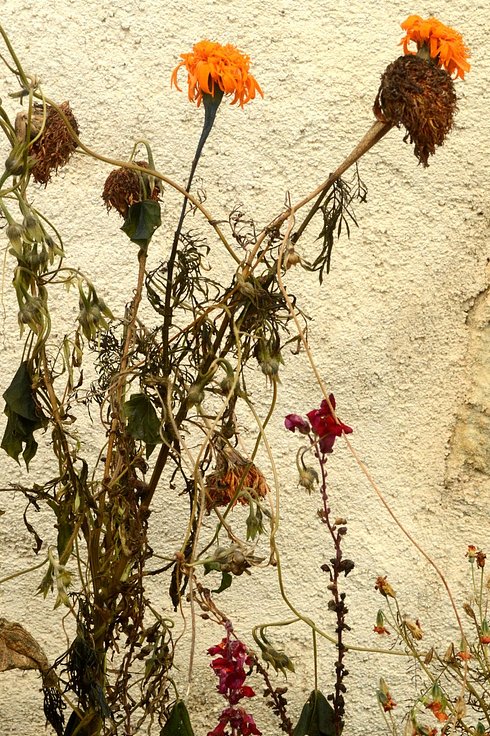 Leaves turning in a late autumn backlit by a bright and rising sun; turning in the cold air their purpose no longer to feed a tree heading for a quiet winter.  A brief hour of artfully twisting in the breeze and then they fall to earth to decompose and begin a new purpose by feeding from underneath the tree they helped sustain all spring and summer long.

Smell lingers in the hair the nostrils and the air; holds the hands against the ears of dogs still shaking from the bangs and booms.  Silent fireworks for whole displays may satisfy the dogs but not the children.  Grandchildren kept back and not allowed to touch whilst old men remember burning games when eyebrows were a lucky loss.

Pause and move pause and move clutch and brake squeeze and glide push and press pause and move hope and wonder; there is something wonderful about motoring but not heading across South London in the rush hour.

Grey day light chill a silence from the birds as if awaiting something.  Lonely squirrel grey, some would say unfortunately grey, skitters along the bottom of the fence; sidles his way across the flower bed taking cover from the last dahlia; surveys the lawn the sky and the bird table; runs in to scrabble at the fallen seed then freezes in the shadow of a passing pigeon.  Pigeon passes squirrel vanishes.

Rain falls, an English rain from a cloudy grey and very English sky.  Only a thousand years of war and exploitation can claim the right to name the rain and hold the very sky in place with one short adjective.  Despite that domination now long lost some still believe that English holds a greater description that exceeds and supersedes all others.

Ground attracts my feet; feet sink in to the soft leaf layer; impress upon the damp earth; earth of home; home heads to winter as more leaves fall and cold descends and slows the movements of the insects; sends some animals to hibernation and others to hole up and hope; and brakes most trees until they stop and hold themselves as still as still can be sapless in the season.

Rain wafts in; a gentle rub across the ground a turn amongst the leaves and once all is dampened departs for places foreign.  Hangs in the air does the threat of more but this is not news and does not happen.  Grey clouds are finally pulled apart by an aging but not yet fully wintered sun and light and warmth arrive to stir the dampness.

River runs a little higher fed by rain strained through what was so recently dry stale earth; no longer almost silent now almost making noise in places; rocks spill water onto rocks and into pools softly but not soundlessly; the rhythm of the swish of winter splashes and prepares to crash about us.

Worldwide, parents praise UK
For cutting down their mothers
For orphaning their children
Leaving them to bleed and die

Tree fell in the night; rising waters finally loosening its bank; heard only by sheep and birds and felt by insects and burrowers; it lies across a meander roots raised above the water branches dipping into it; already catching leaves and building barriers that change the tone from swish to strangle the juttering of spray-beaten twigs frothing the surface as they sing.

Meanders move but slowly; banks are eaten out in years and changes accumulate over many seasons.  Not so the water that makes these changes.  As autumn rains swell the flow the stretches and curves hold a mirror to the world of leaves falling from quietening trees; leaves that may be caught and held within that mirror.  It is the debris of the year that changes courses for the river; forcing wide expanses into noisy narrow spaces; add rocks and the tumult rises.

Sparkles on the grass.  Sun runs down the slopes pretending light dustings of snow; where shade predominates it sets an icy charm.  More than dew yet less than frost they hold the sunlight in minute grains of water and gift a bright white background to the droplets so big they’re barely hanging on that sag from barbs of hawthorn and the spikes of farmer’s fences and lens the sun into vast wondrous and overlapping images.

Last night thin mist settled soft and shallow spreading white across the fields mantling the earth.  In our hollows it has gathered and thins the views of trees.  An ancient ash tree rising to the stars stands sentinel; surrounded in its summit by a burst of mistletoe as if a watchtower hovering above the world; and every leaf that falls becomes a signal to world of stories it could tell.

Thick mist engulfs and hides the world; a world that fades but feet away into a vagueness and uncertainty.  Hidden by this fog a myriad of miniature spiders have been busily building tiny webs from twig to twig; a teasel lost and all but dead droops from where once it proudly stood now wrapped in a cocoon of thread a coffin that serves as its own smog.

Path is a patchwork of colour combinations; broad streams of brown and black that darken with each day; tricoloured meadows – gold and yellow and golden-yellow accentuated by flecks of pale brown highlighting the assured future; and sudden splurges of freshly minted green some dark some pale leaves broad and thin and fine all torn from living trees and thrown down as if in deep defiance of coming winter.

Not a winter wind but an autumn breeze invites the dried out fallen leaves to one last dalliance and dance before they deteriorate and drop and die within the dampening earth. And so with a swirl and whirl they spin and twirl; drawing patterns of life through the air before falling that final fatal time.

Winter wandered out last night and breathed across the earth; cold chill breath; the first full frost that held through dawn and saw the sunrise; showed the sparkled blades of grass with sharpened ice edges and paraded remaining leaves tipped with hoar; weak and pale sunrise shrouded in thin cloud; an ancient aging man struggling to hold the warmth of life and bask in memories of summer’s wonders.

Lazy looking buzzard circles high hunting for a trail that will lead her to a breakfast; drops a hundred feet and catches air again to glide long and slow checking something on the ground; another drop below the tree line a feathered scimitar curving through the air; and finally a last fall almost gentle in the softness of the swoop; and on the earth death delivers life.

So many trees last night gave up their leaves as dark time cold sunk into stems and froze the final vestiges of life; fresh carpeting the woodland floor; a blanket on the slow and sluggish stream whose droplets cling tightly one to one barely move in quiet corners and solidify where still.  Stand and you can hear them break and as they fall brush frosted fronds against the forest; and when they land amongst their stiff and lifeless fellows crumple and release a last if little gasp.

Gold and white and carrying their shadows on their shoulders clouds creep in from elsewhere night time revels to catch and bask in early sun that warms their undersides; to fill the sky that in the dark was clear and filled with stars.

Damp; dripping damp; not yet dropping damp and definitely not drizzle.  Liquid hangs suspended in the air points moving up as well as down they accumulate upon a leaf until they can coalesce imperceptibly into a film that then accrues upon a barely downward slope into a droplet that eventually almost becomes a bead and when sufficient gather holds for a moment and then drips.

Air clean and chill washed by late night autumn rain; a child standing in the bath tub of life scrubbed and clean and bright; ready to take on all the world can throw be it wind or storm or tempest; ready open full of hope for all the wonder that this day and each day after holds.

Lonely horseman rides from out the east slipped down the mountains to this plain; a wind not strong nor blasting bare enough to stir a leaf or two; but chill sliding between the remaining leaves to bring cold even within the wood seeping across the earth to settle on unmoving ankles wafting softly on exposed hands and faces to slowly sap the warmth and cool the blood.

Subtle rains have seeped into the earth and filled it; so now it leaks into the river and slowly tops it up; not to the brim but sufficient to show a current; unlike the summer past where it was a low-lying mirror; and now half full it seems to move half speed a lumbering beast as if dragging some great weight; perhaps the twigs and leaves that catch its surface hold it back; and so it ambles on like these words meandering across the screen.

They stand and stare do sheep; calmly oblivious to the gentle breeze broken by their thick warm coats.  They stand and stare at nothing much occasionally bending down to crop the grass or ruminating from another stomach to chew the cud; and always aware of the nearby herd.  They stand and stare do sheep until one is spooked then suddenly those closest spook themselves and then those further and furthest all within the twinkle of an eye they swivel scared and scamper hard together.  No mastermind no leader no one in charge no hierarchy no orders just responses to whoever moved; all for one.

Leaf that broke and fell from nearby neighbour and wafted down on gentle draft now dangles solitary amongst the twigs of one cleared uncovered tree.  It waits like others holding to their trees for autumn to finish work and throw in a goodly wind to pull them from their perches.  When winter storms arrive they will want bare branches to shake and rattle.

Old dog wanders all but blind; hearing is close behind so my call cannot be positioned.  On the path he follows close the trees and brambles hold him to that meandering line but in wider spaces he can drift digress and deviate.  Loyalty intense he suffers when expectation of my presence is not matched by actuality and he either hunts in turns about or strides away at speed to find me.

Blast of feathers and of down tightly curled at the centre of a small clearing now marked for death.  A bird descending for an early worm in the pre-dawn dimness surprised by some creature of the wood; most probably a pine martin or similar.  Taken by the neck the predator would have swung sharply left and right breaking the bird’s neck and scattering down and feathers neatly round.  And by the time they had settled the hunter would have departed with their prey.

In ones and twos they slip in silently caught only through the corner of the eye; one flutters on ahead others steal up unseen; crowds suddenly appear bright colours masking action all around, distracting watchers on the borders.  Not listed in the annals as natural inhabitants, interlopers, foreigners, strangers, not suited to our ways, different smelling sounding looking, should go back from whence they came.  People and parakeets.

Frost has made sharp swords of neat suburban grass; edged each blade in silver rime; this field of weaponry broken only by the tree fallen leaves that lie and linger; bounded by stone the limitless leaves of grass are limited edged and controlled; and in an hour these sharp reminders will have melted.